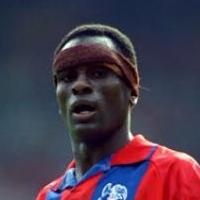 Eric Young is a retired footballer, who was a strong, commanding 6ft 2 centre half nicknamed "Ninja" due to his ever-present brown headband.

Young started his career at non-league Southall and then moved to Slough Town where his commanding style was noticed by a number of league clubs; he played for Slough for 3 seasons.

Young was eventually signed by Brighton & Hove Albion in 1982. During the period in non league football Young continued with his accountancy training.

He made his league debut in the first match of the 1982/83 season and went on to make 126 appearances for the club, scoring 10 goals before transferring to Wimbledon for £70,000 on the eve of the 1987/88 season. He became a firm favourite at Wimbledon and had a formidable central defensive partnership with Andy Thorn.

After 99 appearances and 9 goals for the club he was sold to Crystal Palace for £850,000. At Palace he played some of the best football of his career, and resumed the Thorn/Young defensive partnership that had been so successful with Wimbledon. Eric was a mainstay in the team that finished 3rd in the old first division (now the Premiership) and kept his place in the side until a public fall out with manager Alan Smith at the beginning of the ill fated 1994/1995 season that saw him dropped until the final five matches of that campaign.

After 161 appearances and 15 goals for Palace he then joined Wolverhampton Wanderers on a free transfer, where he played 4 league games scoring 2 goals before retiring, and is now working as an Accountant in Slough.

Eric qualified to play for Wales due to being born in Singapore but holding a British passport. He opted to represent Wales, despite having no family connection to that country. He made his début for Wales aged 30 versus Costa Rica in a friendly game at Ninian Park in 1990, alongside fellow débutantes Gary Speed and Paul Bodin. Despite his late start, Eric won 21 caps.

Young remains a fans favourite, appreciated by those who followed his clubs and Wales for his committed, no-holds-barred approach to football.