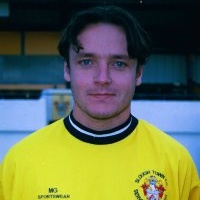 High profile capture from Crawley Town as manager Graham Roberts looked to build a side fit to return to the Conference.

Formed a midfield partnership with David Rainford in his time with the club. Was capable of pushing forwards from midfield and offered a range of passing to establish many Rebels attacks from anywhere on the field. Scored on his debut with a deflected shot against much fancied St Albans City.

Hawthorne began his career as a junior with Crystal Palace, turning professional in June 1992. He moved to Sheffield United on a free transfer in August 1994 after failing break in to the first team at Selhurst Park. He played three times in the Blades Anglo-Italian cup side, but was released later that season again having failed to make his league debut.

He joined Walsall on non-contract terms before moving to Torquay United in March 1995 and finally making his league debut later that season. He was released in the summer of 1997 by Torquay head coach Kevin Hodges after making 58 league appearances. He joined Hayes, but by the end of September had moved to Crawley Town where he made 113 appearances and scored 13 goals. He moved to Slough Town, but returned to Crawley on the 3rd of November 2000 when the travelling to Slough became too much for him. He was released by Crawley at the end of the 2000-2001 season, and after proving his fitness in a trial period, rejoined Slough Town in August 2001.

Hawthorne left Slough to join Carshalton Athletic in November 2002, but left in June 2004, after playing 34 games, to try and find a club closer to his Horsham home. He joined Worthing for pre-season training and again on trial in September 2004. In January 2005, Hawthorne signed for Burgess Hill Town, but signed for Horsham later that year and was part of the Horsham side during the 2005-06 season.