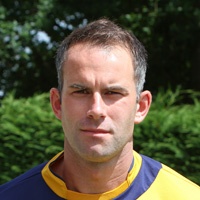 Defender David Woozley joined in February 2011 following the demise of local rivals Windsor & Eton, where he was club captain.

David signed for Windsor & Eton in the 2009/10 season and helped them to win promotion to the Zamaretto Premier Division. He later became club captain and played 33 games this season before the Royalists' demise which saw the club wound up.

Woozley began his career as a trainee with Crystal Palace, turning professional in August 1997. He played 22 times in the league and six times in cup games the following season. He then had spells at various other Football League clubs, most notably Torquay United, where he played 60 games.

In 2006, he became joint manager of Crawley Town after a spell at Oxford United, but the following year, he announced that he was to leave Crawley and retire from professional football, aged 27, to take up a job with the Fire Service. Woozley then continued his non-league football career with Farnborough, before spells with Staines Town and Carshalton Athletic.

He has now played over 150 games for the club and played a vital role in the club winning promotion last season.