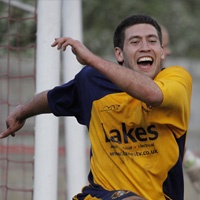 He wasted little time making an impact at Slough, scoring 28 times in his 40 appearances in season 2010/11, a total which included two hat-tricks and one four-goal haul against Beaconsfield. He finished the season as the club's top scorer, earning him the Golden Boot, Manager's player of the season, and Players' player of the season awards.

In 2011/12, Danny was part of the Slough team which ran St Neots Town close to the Southern League Division One Central title, scoring 24 goals in all competitions, a haul which again won him the club's Golden Boot award.

In 2012/13, he was part of the team which reached the FA Cup First Round. In January 2013 he broke into the top 20 all-time Rebels goalscorers, scoring his 73rd and 74th goals against Beaconsfield and Uxbridge respectively.

Before joining Slough, Danny was well-known for his exploits at Chesham United, having scored 90 goals in 150 matches for "The Generals". He was the joint winner of the Zamaretto Midland Division Golden Boot in 2008 after netting 27 goals.

He made a brief return in October 2013 after a spell at Burnham to cover for injuries in Neil Baker and Jon Underwood's Rebels squad.