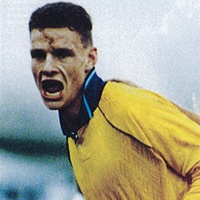 Widely regarded as one of the best defenders to wear a Rebels shirt, Foran was quickly snapped up by Crewe Alexandria after just 33 appearances in a Slough shirt.

Mark Foran was once referred to as a "giant" by the then Peterborough United manager Barry Fry. The 6'4" defender featured briefly during footage of the video "Great Balls of Fire" hosted by Vinny Jones when Fry was heard to shout "We've got a giant, why don't you f****** use him!" at one of his players.

During an FA Cup tie, playing for then Division 3 Bristol Rovers against then Premiership Derby County he man marked Fabrizio Ravanelli, the former Italian international. Rovers won the tie 3–1 at Pride Park.

A five-game loan spell at Wycombe Wanderers in the mid 1990s saw Foran voted by supporters as the worst ever player to represent the club. He did however return to haunt those who had given him this unwanted tag when he scored a headed goal against them whilst playing for Peterborough United.

A compendium of injuries contributed to Foran's shortened career, suffering a broken leg while playing for Crewe reserves, inflicted by Liverpool's Karl-Heinz Riedle.

He drifted into semi-professional football in the early 2000s before retiring to pursue a career outside the game.