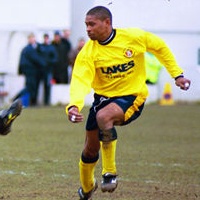 Pacy, intelligent striker signed for the club following a lengthy pursuit from Kingstonian.

Made his name playing for Luton before a leg break cut short his football league career as he struggled to regain his form. Scored 21 times for the Rebels in difficult circumstances and had a good partnership upfront with Mark Hall.

As a schoolboy, Marshall attended Holloway Boys School in North London, and was one of the most gifted right-wingers of his day, making many appearances for Islington schools. As a professional, Marshall was an attacking left-winger or striker who featured for Plymouth Argyle, Middlesbrough and Luton Town. He also appeared for a number of non-league sides during his career. In total, Dwight made 129 league appearances for Argyle, scoring 40 goals. His time at Luton was also successful as he played in 128 league games and scored 28 goals for the Hatters.

Dwight unfortunately broke his leg during the 1995-96 season, which ended with Luton being relegated from what is now the Championship. After this he never really regained his place or his form, and he eventually left for a brief spell back at Plymouth. He then drifted into non-league football, playing at Kenilworth Road again for Kingstonian against Luton in an FA Cup tie during the 1999–2000 season.