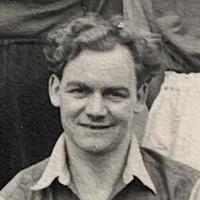 Leslie Brown was in the little village of Gelli, Ystrath, in South Wales. As a youngster, he showed no signed of becoming the footballer he has sinve proved to be. As a schoolboy, the game didn’t interest him, and it wasn’t until 1935, when at the age of fourteen he came to Slough, that he had any desire this direction.

Since these days, Leslie has gone from strength to strength. At fifteen, he played for G.W.Z. in the Windsor and District Junior League and he came the proud possessor of the League medal whilst playing for Hampshire Hall.

On joining the firm of H.D.A. he hwas one of the eleven who made up a first class works team. Joining Slough United in 1942, he was elected skipper in 1944, and has held that office ever since, except for the period when the Army claimed his services.

In 1943/44 he was selected to play for the Herts and Middlesex League, and again in 1944/45. In 1949/50 he was chosen as Captain of the Berks & Bucks Eleven, and has been offered that honour each season since. He represented the Town Club in the Corinthian League Team in 1949/50. His proudest moment must have been when he was invited by the Welsh Amateur Football Association to captain the side in the Amateur trial held at the Dolphin Stadium in 1950/51. The weather was the deciding factor in this game. The ground was covered in snow and the lines had to be marked out in red. It is generally believed that, had conditions been at all favourable, he would have got that coveted “cap”. Season 1950/51 provided him with some compensation however. It was the Club’s Jubilee and skipper Brown led his team to victory to become champions of the Corinthian League, thereby creating a record by winning a senior league championship for the first time in fifty years – an honour that many former captains would have given much to achieve.