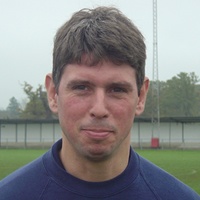 Prolific striker who joined the club from Oxford United.

Whilst not blessed with pace, the rest of Murphy's game was a class above as his 25 goals in 41 Rebels appearances proved. Provided a great partnership with Ian Hodges and Matt Seedel as the trio combined to provide 53 goals between them in the 2004/5 season. Left in the summer of 2005 to join up with Brackley Town where he continued his goalscoring exploits.

In February 2009 he was appointed player/assistant manager of United Counties League side Daventry United.