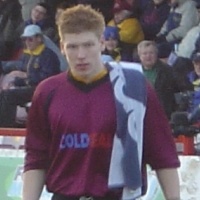 Young keeper signed on loan from Brentford. Took a few games to settle but once he had, pulled off match winning saves for the Rebels on a number of occassions.

Joined up with fellow Brentford loanees John Mousinho, Charlie Ide, George Moleski and Aaron Steele in his time with the club. Upon his return to Brentford, pushed into the first team and his performances were catching the eye of Premier League Arsenal, but a loss of form has since seen Masters loaned out to Conference sides to return to form.

Starting his career with Brentford in 2004, he moved on to Southend United four years later, and Aldershot Town in 2009. He has had several loan spells at non-league clubs.

After a youth career with Brighton & Hove Albion and Gillingham, Masters started his senior career with Brentford. In 2005 and 2006 he had loan spells with non-league clubs Redbridge and Slough Town. He signed professional forms with Brentford in June 2006.

He made his Brentford debut against Blackpool in the first game of the 2006–07 season, stepping in for Stuart Nelson, who was suspended. On his third appearance, a 2-2 draw with Gillingham on 21 October, he was sent off for "denial of an obvious goalscoring opportunity". Though the club successfully appealed the suspension. Rumours circulated that the young keeper would be signed up by Premier League side Arsenal. In March 2007, Masters joined AFC Wimbledon in a one-month loan deal. He played five games for the Dons, keeping two clean sheets, before being recalled by Brentford.

Signing a new two year deal in July 2007, he embarked on another loan spell the next month, this time with Welling United. He played four games.Masters joined Football League One side Southend United on 11 January 2008, and was immediately loaned out to Conference National side Stevenage Borough. He never played a competitive game for Southend, and had a trial with Grimsby Town, in an attempt to find regular football.

In July 2009, Masters joined Aldershot Town on a one year deal, as a replacement for outgoing Nikki Bull. On the 1st February, Masters was released by Aldershot Town and immediately signed for Conference National side Hayes & Yeading United.

On 5th Nov 2010, Masters joined Barrow on non-contract terms. He was injured while trialling with Millwall, but returned to action a few weeks later. He was Barrow's first-choice keeper for the remainder of the season. He left in May 2011, however, due to the travelling distance between his home and Barrow. Masters joined Eastbourne Borough on the 16th June 2011.