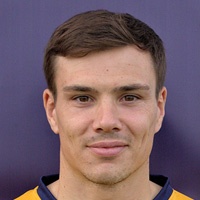 Scott Harris is a striker, who joined the Rebels in June 2013 from Godalming Town following the arrival of new joint managers Neil Baker and Jon Underwood.

Known as ’Hatchet’, he previously played for Ashford Town (Middx), where he spent a number of seasons. He played under Baker and Underwood at Godalming for two years, and has scored more than 20 goals in both seasons. He was previously with Ashford Town (Middx), where he was part of the team that achieved promotion to the Ryman Premier Division, and was in the top goalscoring charts at that level too.

Scott is a strong old fashioned type of centre forward - incredibly strong, and works himself into the ground for the team, a handful for any defender to mark. It is noticeable that Scott's strike partners enjoy playing with him, as he tends to occupy the defenders which usually means the other forward gets a bit more time on the ball.

Whilst he did not have the impact he was hoping for initially, he showed what he could do after Christmas with a string of excellent performances, and only a knee injury put paid to his season when he was in a great run of form.