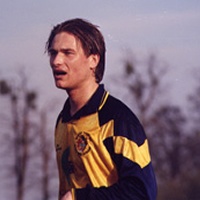 Talented defender who worked his way up through the ranks to establish himself in the first team at Slough in their final season in the Conference.

Stowell, a Reading youth and reserve player until 1996, joined Slough and made 40 appearances. He could play anywhere across the back line and was also comfortable in central midfield or at wing-back. He scored Slough's last goal as a Conference club in a 1-0 win at Kidderminster in May 1998, smashing a right foot shot from over 25 yards out into the top corner.

He was transferred to Division One Bristol City for £15,000 at the end of the 1997/98 season as a number of players departed the club, after being spotted by John Ward. He failed to break into the first team and went out on loan to Wycombe Wanderers and then Yeovil Town in September 1999, before moving to Rushden & Diamonds in December 1999, for a reported £30,000 fee.

His Diamonds career was very stop-start, and was not helped by his dismissal at Southport in April 2000, which proved to be his final league game for the club. Although he still had a year to run on his contract, he was not among Brian Talbot’s plans, and he was loaned out to several clubs.

He was released by mutual consent in November 2001, and joined Hampton & Richmond Borough, before spells with Thame United in March 2002, and Henley Town the following season. He later emigrated to Italy to play for Vultur Rionero and then AS Trapani.

Stowell gained his UEFA ‘B’ coaching badge, and in the summer of 2006, became player/coach at Hellenic League side Milton United.