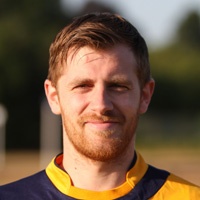 Johnnie is a forward who joined the Rebels in June 2013 from Godalming Town following the arrival of new joint managers Neil Baker and Jon Underwood.

Like one or two others, Johnnie started last season a little slower than he would have been hoping, having missed the first few games. However he burst into life with two goals against Barton Rovers, and proceeded to score 27 goals in 39 games. His goal to minute ratio was one every 97 minutes, which was only bettered by Eddie Smith. Like Eddie, he missed chunks of the season to injury and illness.

Johnnie took his two goals in the Play-Off Final at Kettering superbly, helping the Rebels recover from a 0-2 half-time deficit.

He was Godalming's top goalscorer in season 2012/13 with 24. He is a former England schoolboy international and previously played for Binfield, Fleet Town, Uxbridge, Bracknell Town and Basingstoke Town, where he made his first team debut in the Conference South aged just 16.