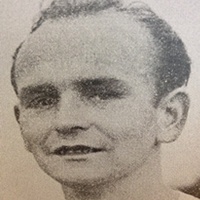 Henry Kornas was born in September 1925, in Chorzow Bat in Poland, and as a schoolboy showed keen interest in the game representing his school. In 1940, he was taken by the Germans to work in Germany, and opportunities in playing were non-existent. After escaping he joined the Polish Force somewhere in Italy, and soon became a member of the Carpathians (Polish Army Team) and was member of the side that was so successful against representative sides (consisting mainly of professionals) against whom the Carpathians played through Italy, across Europe to this country.

Was in Camp in the Midlands and played some games for Port Vale, but after his transfer to the Camp at Beaconsfield in 1944, he joined the Town Club and soon established himself as a favourite with the crowd with his Continental style of play.

After his move South he was approached by Port Vale to sign as a Professional, but whether it was a 'certain little lady' or the fact that he was happy in Bucks that stopped him it is difficult to say, but he was married at Beaconsfield on it snowy day last March.

Henry was a strong, hard worker, and though one sometimes hears complaints of his "roaming" he is often on the right spot and always trying to fox the opposition, Was second only to Ron Clements as a goal scorer last year, and is the team's "penalty king” only having missed once.

Henry has received many invitations to go to other clubs, but has on all occasions declined, and even when stood down for a short period remained loyal to his Club. We would like to show our appreciation of a Big Hearted Polish Gentleman.