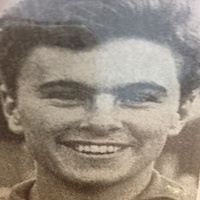 Undoubtedly one of Slough's biggest "discoveries" during the close season was left-back John Ford who at 17 was the baby of a young side. John graduated straight from youth soccer to the Corinthian League.

He made his first-team debut with the opening match of the season and has missed only one since, when he was playing for the county youth team. Subsequently he was selected to captain the county youth side but asked to be released so that he could assist Slough against Epsom.

John moved with his family to Slough from West Drayton in 1958, having played for Southall G.S. and Uxbridge Juniors as a centre or inside-forward. John went to Slough Grammar School and played in the district team but he was better known in youth football. playing for two seasons in the all-conquertng Old Paludians team. He was in the all-conquering Old Pals side of 1960/61 and was in the County Youth side (under-18) that season and the next-the latter as captain.

At first he played at full-back but towards the end of last season went up into the forward line "for a laugh" and succeeded in scoring several goals.

Already this promising youngster has come to the notices of professional clubs and he has had a trial with Arsenal Youths but laughingly would answer only "no comment" when asked about the possibilities; of a professional future.

John joined the Rebels in 1961 and the same year signed amateur forms for Arsenal and played in the South-Eastern Counties League. He also signed Combination forms for Q.P.R.

Noted for his consistency and sportsmanship, he subsequently moved on to Wokingham Town in 1968, appearing for the team that defeated Slough in the Berks and Bucks Senior Cup Final in 1969.

John worked at the Town Hall. A cost clerk by profession, John says that besides soccer, his hobbies are collecting modern jazz records and playing golf. "But I'm not very good at it", he insists. John, always a consistent player, gained confidence - and apparently, a sense of adventure. It is nothing these days to see him challenging his opponents' goalkeeper.

To the question, "What is your favourite hobby?" he answered, "My wife ... and a very good hobby she is too!" If he can adapt himself to golf as well as he did to the left-back position, then he should soon be an accomplished golfer.