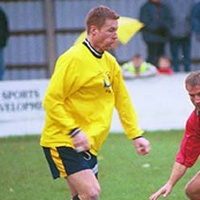 Dylan Kerr is a Maltese-born English former professional footballer. He played as a defender, specifically a left-back.

Kerr began his career at Sheffield Wednesday in 1984. He didn't make any league appearances for the club in his four years at Hillsborough, and left to join South African club Arcadia Shepherds in 1988. A year later, Kerr returned to England to join Leeds United. He only made thirteen league appearances in his four years at Elland Road; however, he was also loaned out to two clubs: firstly Doncaster Rovers (with whom he scored his first League goal), then Blackpool. In his three-month spell at Blackpool in 1991â€“92, he scored one of the team's goals in a 5-1 victory over Lancashire rivals and eventual division champions Burnley at Bloomfield Road. In 1993, Kerr joined Reading, with whom he would make the most league appearances of his career: 89, including five goals. He was a member of the Royals' Division Two championship-winning side, and also when the club finished runners-up in the Division One the following season. In 1996, Kerr signed for Scottish club Kilmarnock. He made 61 league appearances for Killie in four years. At the end of his first season with the club, he won the Scottish Cup. Not long after the Ibrox final, Kerr suffered a recurring groin injury that kept him on the sidelines for over a year. Kerr was eventually released by Kilmarnock, and after one league game on loan to Carlisle United he joined Slough Town in October 2000.

In September 2000, Kerr briefly joined Kidderminster Harriers on trial, but his one-month contract was cancelled due to a claimed breach of club discipline. He returned to Scotland, signing for Hamilton Academical in January 2001. Over the next three years, he played for Exeter City (on a three-month contract), Greenock Morton, Harrogate Town, East Stirlingshire and Hamilton Academical once again, before finishing his career with Scottish junior club Kilwinning Rangers in 2003. After retiring, Kerr coached in the United States (specifically in Phoenix, Arizona) for a while. Unable to obtain a visa to extend his stay, he returned to Scotland, and is now working as Argyll and Bute Council's Football Development Officer.

In September 2009, Kerr signed a contract as an assistant manager at South African club Mpumalanga Black Aces until June 2010.