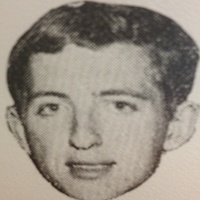 Began as a centre forward at Slough Grammar School and played in a variety of forward positions before cementing his reputation as a very skilful “John Robertson” style outside left, regularly bamboozling defenders with his clever footwork.

Bobby was undoubtedly one of the best ball players at the Dolphin and was probably best thought of for his great performances against Wycombe Wanderers when he gave an England reserve full-back John Beck a terrible afternoon.

Like John Mead, Bobby, who comes from Cippenham, was a member of the all-successful Old Pals team of the 1960/61 season. At that time, he played
inside-left but when he joined the Rebels the following season he played at centre-forward.In his school days Bobby played for Slough and District Schoolboys, the Bucks Grammar Schools XI and the Berks and Bucks Youth XI.

In his first season with the Rebels he was a regular in the Reserves, although he did have five first team games last season

He began the present season where he left off last term-on the left-wing-but after a dozen or so outings was switched to centre forward. Now he is back on the left-wing, having played one match on the other wing.

A first team regular from 1961 to 1966, he had a degree in economics having studied at the London School of Economics.