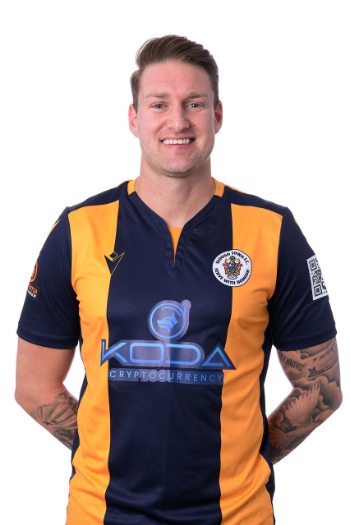 He was originally brought in as a striker but is now used primarily as a centre back, the position he played at the start of his career, although he remains a useful option as a target man when needed.

A local lad, Ryan arrived at Arbour Park having scored 192 goals in 576 first-team appearances in both the professional and semi-professional game.

He began his footballing career at Burnham, where he was promoted to the first team in 2004 at the age of 16. In total, he scored 133 goals in 340 appearances for The Blues, including 45 in 45 appearances in 2012/13 as his side won Southern League Division One Central title.

After a successful trial Bird turned professional, joining League Two side Portsmouth. He scored his first professional goal in a 1-1 away draw against Torquay United and followed that up by netting twice the following weekend on his first league start, in a 3-2 home win over Exeter City.

Bird joined Cambridge United on loan and he was instrumental in the club’s run to the final of the FA Trophy final, scoring all three of their goals against Grimsby Town in the semi-finals. He then scored the opening goal in the final at Wembley as Cambridge United beat Gosport Borough 4-0.

After his release from Portsmouth, Bird joined Cambridge United on a permanent basis, scoring six times in 24 appearances, before joining Yeovil Town on a two-year contract. He scored eight times for the Somerset side.

A spell at Eastleigh followed before Ryan returned to the Football League with Newport County in 2017. He then moved to National League side Dover Athletic, finishing the 2017/18 season as the Kent club’s top scorer with 16 league goals in 43 starts.