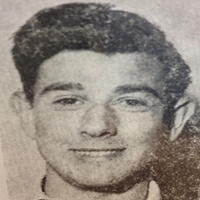 Bernie made his first-team debut at Dulwich Hamlet in 1961 and had the distinction of scoring Slough's only goal.

This was after a couple of outings with the reserves where he impressed with his ball control, bustling play and strong shot. He played on a couple of other occasions for the first-team before resuming in the reserves. Bernie was a centre-forward and played in that position for Loughborough College, going there straight from school at Brockenhurst.

Hugely popular, good in the air and possessed of a powerful shot, he led the Rebels’ attack almost single handedly before linking up with Peter Lowen to form a lethal goalscoring partnership during the championship season of 1964/65.

Bernie's all-round ability was rewarded with several Berks and Bucks appearances, and he scored twice in a county match against Worcestershire.

He was born at Ringwood in Hampshire and played for Hants Grammar Schools for three seasons. While at Loughborough College he played in the college team, and joined the Rebels his first senior club - when he was appointed P.E. master at Warrenfield School.

Bernie met his wife Marion at Warrenfield and moved to teach in Hemel Hempstead. He left the club in May 1966 on moving away from the district and later featured for Hemel Hempstead Town and Chesham United before joining Hitchin Town. Whilst with the Canaries, he maintained his fine goalscoring record with 108 goals in 210 appearances – helping Hitchin to runners-up spot in the Isthmian League - and he also scored twice in the London Senior Cup final in May 1970.

Off the field, Bernie, took a big interest in the schoolboy soccer connected with his job. When not actively concerned with sport he liked to relax and listen to music.