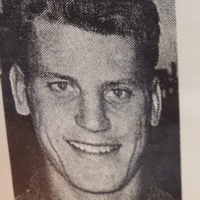 A regular left half for the first team who established himself in the side as a 20-year-old. Malcolm gained a regular place in the team after being demobilized from the Royal Artillery, where he played for his regiment. He made his debut at left-half against Wokingham in the Benevolent Cup but he made his name in Slough soccer circles long before that.

Malcolm went to Ragstone Road school, and sometimes called “The Iron Man”, playing soccer as a left-winger and gaining his place in the District side. In fact he played in the team which reached the last eight of the English Schools' Shield, being beaten at Liverpool after holding them to a draw at Slough. The Quarter Final of the English Schools Shield was played in front of a crowd of 25,000 at Anfield in 1953. At that time, incidentally, he was the smallest boy in the team.

Very rarely found his name on the score sheet but scored a valuable goal against Hazell’s, Aylesbury to keep Slough in the competition during their famous run to the quarter final of the Amateur Cup in season 1966/67.

After leaving school Malcolm was on Reading's books for a time before being called up for National service. A carpenter by trade, Malcolm was married with two sons and lived in Upton Court Road, Slough, in a bungalow which he designed and built himself having run his own building business.