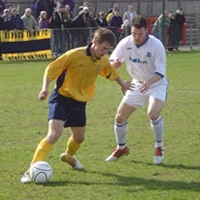 Young striker signed on loan from local league side Brentford.

Joined up with fellow Bees Clark Masters, Aaron Steele and George Moleski in his short loan time with the club. Scored his only goal in the televised clash with Folkestone Invicta which was part of a Bravo TV series calld "A Mans Work".

Ide is a striker who made his debut for Brentford in a 2–1 win over Hull City in May 2005. He had loan spells at Slough Town towards the end of the 2005–06 season and at Sutton United the following 2006–07 season. He was recalled from his loan spell at Sutton and soon found himself in Brentford's first team. He scored his first professional goal against Tranmere Rovers in December 2006 and continued his good form by scoring both goals in the 2–2 draw with Leyton Orient the following month. It was in this game where he earned the nickname of 'The Squirrel', when at a Brentford corner a squirrel turned up on the pitch and ran the length of The New Road Stand, play was delayed, and when restarted Ide scored from the resulting corner.

Ide was generally played on the right wing in the 2006–07 season, yet still managed seven goals in 26 league games.

On 30 May 2007, despite reported interest from higher division clubs, Ide signed a new two-year deal with Brentford, with the option of a further year.

Ide was sent on loan to Conference South side Lewes for the final three months of the 2007–08 season, after failing to regain his place in the Brentford first team following injury.

He was not tendered a new contract by Brentford manager Andy Scott following the season's end. On 22 May 2008, Grays Athletic announced that Ide had signed a one-year deal with the Conference National team. Ide left Grays Athletic by mutual consent on 25 September 2008, after just seven appearances, and dropped four divisions to sign for Wivenhoe Town the following day. In eight days in October 2008, he scored hat-tricks in three successive matches, against Stanway Rovers, Whitton United and Brantham Athletic.

He signed for Isthmian League Premier Division club Carshalton Athletic from Croydon Athletic on 27 February 2009, preferring a move there rather than AFC Wimbledon.