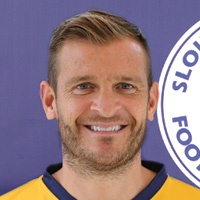 'Macca' returns to the club after a brief spell with the Rebels during pre-season last year. He has a wealth of experience, having spent two years as a pro at Peterborough before playing hundreds of games at the top two levels of non league football with Stevenage, Woking, Ebbsfleet (where he won the FA Trophy at Wembley in 2008), Havant & Waterlooville and Hayes & Yeading.

More recently he has played for Kingstonian and Met Police in the Ryman Premier League before ending season 2013/14 with a short spell at Walton Casuals.

His preferred position is centre back, but he started his career as a left back and is naturally left footed so provides cover in that position too, and has even played in a holding role in midfield.

He is someone that Neil Baker used to play with growing up, and his personality is a huge positive for the changing room. On the pitch he is an organiser, a ball player and an excellent defender, and he will be a huge addition to Slough this year.