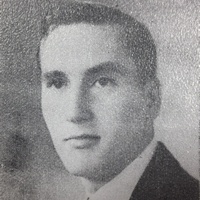 Born in Mansfield, Nottinghamshire on 3 May 1924.

At the age of 19, he joined the R.A.F. and after training in Canada was awarded his wings on 8 September 1944. Slough first made the acquaintance of Arthur in 1940, when at the age of 16, he played for us against Hitchin Town.

From then on he played for the Social Centre Club. On his return from Canada he became a member of Slough United, and went on to play in every position except goal. He played one of his best games at right-back, but settled down at centre forward.

At times brilliant, Arthur always had the potential to develop into a first class player. He was a good Clubman and a sportsman.

Amongst his highlights for the club were a five-goal haul in a 9-0 win against Edgware, and in December 1946 he went two better, finding the net seven times in an amazing 11-4 win at Eastbourne Borough.

Known as “Bomber” on account of his wartime occupation, he enjoyed a big reputation for scoring goals. Moved on to Hayes in summer 1947 but returned to Slough at Christmas 1949 for another season and a half. Subsequently played for Wycombe Wanderers, Windsor and Eton and Maidenhead United.