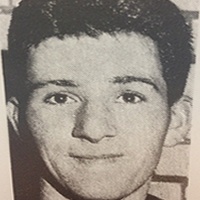 Born in 1941. Established himself in the right back position at the tender age of nineteen. Ralph came to the Dolphin after starring with Slough Boys' Club in the local league as a winger - but was converted to a defender Jimmy Price, who was manager at the time. Converted from outside right into a speedy right back, noted for his skill in effecting the slide tackle.

Ralph played almost immediately for reserves but towards the end of the season was involved in several games for the first team and was the side which won the Southern Combination Cup at the first time of asking. In fact he was the only member or the club at the time to holds both a winner's and runners-up medal for this competition.

Ralph again played in the first team at the but later reverted to the Reserves where he gained a Neale Trophy runners-up medal and an intermediate cup runners-up medal. He also represented the county in the minor side on two or three occasions.

He also played at centre-forward for the Reserves one evening against Leatherhead, Slough winning 10-2 and Ralph scoring a couple of the goals.

Ralph returned to the first team soon after and began to settle down in defence. Made his debut during the ill-fated 1960/61 season and retained his place until turning professional with Charlton Athletic in September 1963. Subsequently made 182 Football League appearances for Charlton, Gillingham and Bournemouth before returning to the non-league game in 1970 with Weymouth, having been converted into a centre-half along the way.

A local boy, Ralph went to William Penn -school and played for the district schools' team. Was an apprentice sheet metal worker.