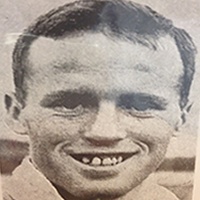 Supposed to be at centre-forward but in Slough's fluid attack spent his time harrying the defence and making the openings.

Jock has looked forward to games against Aylesbury, for it was at Aylesbury that he got his first chance in senior amateur football. He joined Aylesbury while serving with t the R.A.F. and before that he was with South Liverpool in the semi-professional Lancashire Combination. Jock, was a policeman at Slough for nearly three years, turned out for a couple of games for Aspro in the District League but most of his football in this town has been confined to matches for Slough Police.

When he was living at Aylesbury, Jock McCullum, who was then team manager, gave him a chance and he was in the first team for some time as a left-half. He played against Slough on three occasions but can't remember being on the winning side.

Jock, who lived on the Uxbridge Road, took some time to play in a losing first team at the Dolphin. He missed an early defeat, against Carshalton, being on duty, and the two other defeats away from home were before he was introduced to the attack.

Featured in almost every outfield position during his three season spell with the Rebels that was interrupted for a brief period when he was player-coach at Marlow. He tried his hand as a player-coach with Spartan Leaguers Marlow Town, but her soon decided it was not for for him and returned to Slough Town. Moved on to Iver.

A Slough Policeman, Jock, lived at Uxbridge Road with his wife and their two sons, David and Paul.