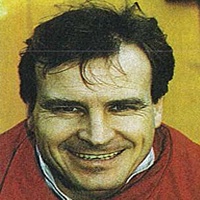 David Michael Kemp is a former English professional footballer and manager. He is currently Assistant Manager at Stoke City.

Kemp began his career with Harrow Borough, subsequently playing for Maidenhead United and Slough Town before joining Crystal Palace in April 1975. He moved to Portsmouth in November 1976 and was their leading goalscorer in both the 1976–77 and 1977–78 seasons, despite not playing a full season for the club. A hugely popular player whilst at the club he even featured in Roy of the Rovers magazine photographed alongside his fictional golascoring counterpart

During the time he played for Pompey, a song was sung in his honour, to the tune of Lily The Pink. It is a song that is still sung today (2010)

He moved to Carlisle United in March 1978, moving to Plymouth Argyle in September 1979 for a then club record fee of £75,000. He had loan spells with Gillingham (December 1981) and Brentford (March 1982) before joining NASL side Edmonton Drillers in June 1982. He spent the 1983 NASL season with Seattle Sounders and also played for San José Earthquakes before leaving the sinking ship of the NASL in 1984 for the Oklahoma City Stampede of the short-lived United Soccer League (he accrued the 2nd-highest points total in the league).

He then managed Swedish side Norrköping. He returned to England in 1986, joining the coaching staff at Wimbledon. He later took over as manager at Plymouth Argyle in March 1990.

In July 1992 he took over as manager of Conference side Slough Town. He guided Slough to 5th place in the Conference, their highest-ever finish, but left at the end of his first season to become assistant manager at Crystal Palace under new manager Alan Smith where they won the 1993/94 League Championship (and with it promotion to the Premier League), and reached the semi-finals of the FA Cup.

He was appointed as assistant manager of Wycombe Wanderers, again under Alan Smith, at the start of the 1995–96 season, leaving along with Smith after a poor start to the 1996-97 season.

In October 2000, he was appointed as manager of Oxford United, with Joe Kinnear as Director of Football. Kinnear left to manage Luton Town in February 2001 and Kemp was dismissed two months later following protests by the Oxford fans. In December 2001 he was appointed as Chief Scout for Leicester City. Later that month he was named as one of the best 101 players to have played for Plymouth Argyle before joining Stoke City as first-team coach in August 2004, again working under Tony Pulis. Kemp left Stoke in June 2005 when Pulis was dismissed.

In September 2005, Pulis took over as manager of Plymouth Argyle and again appointed Kemp as his assistant. Kemp remained in this post under new manager Ian Holloway until August 2006. In October 2006 he rejoined Stoke City as Assistant Manager, but became a Chief Scout when Peter Reid was appointed as Assistant Manager. In July 2010 Reid left Stoke to become manager at Plymouth and Pulis again appointed Kemp as his assistant.