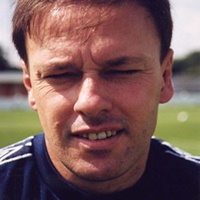 McDermott took over the managerial reigns at Slough in 1996, taking over from Dave Russell, and immediately set about rebuilding the struggling side forming the perfect blend of youth and experience.

He guided the Rebels to an 8th place Conference finish and the semi-finals of the FA Trophy in 1997/1998, when Slough lost 2-1 on aggregate to Southport.

McDermott joined Arsenal as an apprentice in January 1977 and signed professional forms with the club in February 1979. He was a regular in Arsenal's reserve team, finishing top scorer in the London Combination in 1978-79, before making his debut as a substitute against Bristol City on March 10, 1979. He did not properly break into the Arsenal first team until the 1980-81 season, notching 45 appearances (14 as sub) in all competitions in that season and 1981-82.

Unable to match his goalscoring rate at the top level, he featured much less in the 1982-83 and 1983-84 seasons and was loaned out twice, once to Fulham in 1983 and once to IFK Norrkaping between April and October 1984, where he was named Sweden's Player of the Year He moved to Oxford United in December 1984, having played 70 games for Arsenal, scoring 13 goals. His later career included a spell at Huddersfield Town on loan, before stints at Cardiff City and Exeter City.

Following the off field issues at Slough in the "summer of hell" in 1998, McDermott moved to Woking to take on the managerial position, but his experience here was less successful than at his hometown club and he soon departed the Cards. He joined Reading as Chief Scout in September 2000, taking over from the late Maurice Evans. After spending 10 years at the club as Chief Scout and reserve team manager, McDermott was appointed 1st team manager of Reading on 27th January 2010 and has guided them to the Championship League title in April 2012, following the disappointment of play off final defeat in the previous season.