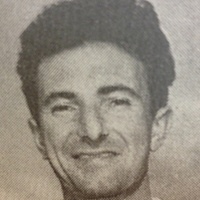 Renowned as being the penalty king. Followed manager Len Townsend from Madienhead where he had made a name for himself as a forceful outside left and centre-forward.

But here he has made his mark as an extremely able right-half, a position he had never filled before. And it was not until Slough met, and beat, Redhill in the Combination Cup at the end of last season, that he turned out alongside skipper Ken Clarridge.

Les comes from Hanwell and started his career in senior amateur soccer with Hounslow before moving to Maidenhead, where he spent 14 years at York Road. While at Hounslow he represented the London F.A. and Middlesex and two seasons ago played for the Berks and Bucks F.A. He also played for the Roval Engineers during his Army service.

When Les first came to the Dolphin he had a little difficulty in settling, from Christmas onwards, when he was playing anywhere in the forward line he became very much the brains behind the attack and it was due in no small way to his efforts and his ability to switch the play across field, that the forward line began to enjoy some success.

In fact for several games Les was our only scorer. More often than not the goals came from penalties, but with his height several were scored from a header.