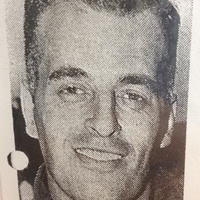 Undoubtedly one of the most difficult tasks in the late 1950s for any player, was that of skippering Slough. For frustrating weeks on end he was faced with trying to encourage a demoralised team and weld it into an effective unit.

The man who did that job - and did it very well - was Ken Claridge, a centre-half, in his first season with the club in 1959/60. That he managed to overcome difficulties and blend the team into a happy side was due in many ways to Ken's personality.

Off the field he was a modest and unassuming chap. On field he marshalled his men well and set an example to them - unlike many skippers who did a lot of shouting and little else. Ken was the veteran of the Slough side at the time, although only 30 years old.

He was short in comparison for a centre half, but kept more than one centre-forward tied up in knots by his reliability, experience and coolness in the face of dangerous situations in front of goal.

Before coming to the Dolphin at very short notice when Chris Symons was injured at the beginning of the previous season, Ken was at Wembley for a year.

For six or seven seasons previously, he turned out for Yiewsley as wing-half or centre-half - preferring the latter position - until they turned professional and entered the Southern League.

While at Yiewsley he gained a Middlesex junior cap and played for the Corinthian League and London F.A.